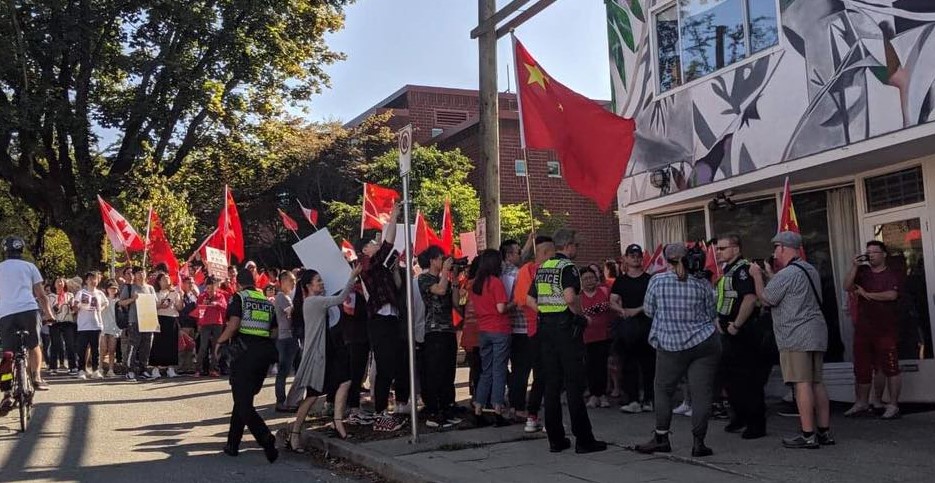 An international news story broke out at an Alliance church prayer meeting in Vancouver last week. Tenth Church is an Alliance church with one of its four locations on the corner of Ontario St and W 10th Ave in Vancouver, British Columbia. On the afternoon of Sunday, August 18th the group Vancouver Christians for Peace, Love and Justice gathered at Tenth to pray for peace and justice in Hong Kong.

The prayer meeting had been posted on the Vancouver Christians for Peace, Love and Justice Facebook page. The posting stated, “In these dark times, let’s continue to pray for Hong Kong, share our burdens and hurts this Sunday, Aug 18 at 3:15pm at Tenth Church Mount Pleasant (11 West 10th Ave, Vancouver – in the Lower East Hall)” This was the fourth prayer meeting that had been organized since early June.

In a statement the organizer of the group said, “As always at these prayer meetings, including this one, we pray for Hong Kong and the people there, including those in the political leadership (1), the police officers, those who were hurt physically (2) and those inflicted injuries on others violently (3). We pray for peace and justice in Hong Kong. And we pray for the churches in Hong Kong and mainland China as well. Meanwhile, we pray for those living here in Vancouver who have been deeply disturbed, saddened, even traumatized because of the recent situation in Hong Kong and the resulting deep divisions among families, even within churches, and allow room for them to share and to grieve. We see this as a pastoral ministry for those under our care.”

Halfway through the prayer meeting the participants noticed a large group of people wearing red, carrying signs, recording with cameras, and waving Chinese traditional flags gathering around the front of the church and the sidewalks. The front entrance of the church was surrounded by a group of more than 100 pro-China protesters and the prayer participants were alarmed—some of them felt threatened. The Vancouver police dispatched nearly 20 officers at the scene who closed the street, guarded the doors of the church, and escorted the prayer gathering participants out the backdoor.

The group of protesters had come from a gathering of people that had assembled outside the Chinese consulate in Vancouver earlier that day to chant their support for the Hong Kong police.

Ken Shigematsu, the Senior Pastor of Tenth Church said, “As a church we never want to get behind an issue that is politically partisan, so we don’t want to be corrupted by any political agenda. However, we want to be behind justice issues—whether it’s advocating on the behalf of women and children that are vulnerable to being trafficked as slaves in Cambodia or supporting the cause of the rights of freedom.”

The protesters present solidified the need for prayer. The need that people in Canada, in Hong Kong, and all over the world need to be shown the love of Jesus.

Pastor Ken said, “For us, it’s been a reminder, we want to stand in solidarity with our brothers and sisters in Hong Kong that are vulnerable to suffering, and it reminded me that prayer is an act of defiance against the way things are.” He continued by saying, “In prayer we rise against the order of this age and join the transformation of the kingdom of this broken world to the Kingdom of our Lord.” Pastor Ken also quoted Martin Luther King Jr. saying, “Injustice anywhere is a threat to justice everywhere. We are caught in an inescapable network of mutuality, tied in a single garment of destiny. Whatever affects one directly, affects all indirectly.” Pastor Ken then commented on this and said, “Our destiny and their destiny is tied in this network. It gives us an incentive to pray. We are all part of the Body. We have a stake in this, I feel, whatever happens to our brothers and sisters in Hong Kong directly affects us indirectly.”

Pray for boldness for Tenth Church, that they would feel the almighty strength of God standing behind them. Pray for wisdom as Tenth Church, and the members of Vancouver Christian for Peace, Love and Justice, discern when/how/if they should continue these public prayer meetings. Pray with Tenth Church for Hong Kong; pray for the people. Pray for people all over the world who are hurting and who do not know who Jesus is.

We Have to Celebrate

Kristen is the Copywriter/ Copy Editor at the National Ministry Centre for the Christian and Missionary Alliance in Canada. She has a passion for words and creativity. Kristen and her husband, Chris, enjoy board games and taking care of their house plants.
Learn more