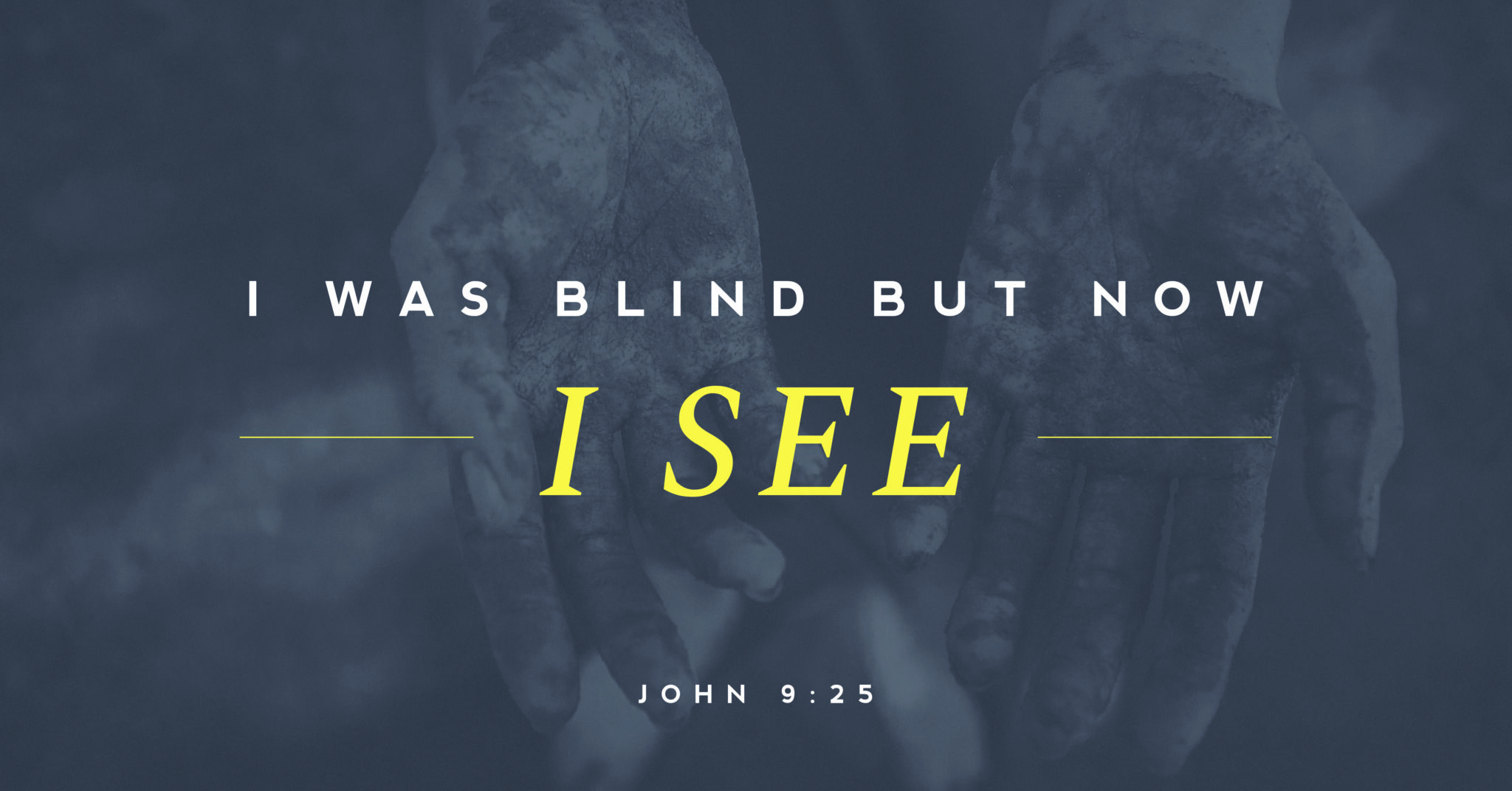 As he went along, he saw a man blind from birth. His disciples asked him, “Rabbi, who sinned, this man or his parents, that he was born blind?”

“Neither this man nor his parents sinned,” said Jesus, “but this happened so that the works of God might be displayed in him. As long as it is day, we must do the works of him who sent me. Night is coming, when no one can work. While I am in the world, I am the light of the world.”

After saying this, he spit on the ground, made some mud with the saliva, and put it on the man’s eyes. “Go,” he told him, “wash in the Pool of Siloam” (this word means “Sent”). So the man went and washed, and came home seeing.

His neighbors and those who had formerly seen him begging asked, “Isn’t this the same man who used to sit and beg?” Some claimed that he was.

But he himself insisted, “I am the man.”

“How then were your eyes opened?” they asked.

He replied, “The man they call Jesus made some mud and put it on my eyes. He told me to go to Siloam and wash. So I went and washed, and then I could see.”

“Where is this man?” they asked him.

They brought to the Pharisees the man who had been blind.  Now the day on which Jesus had made the mud and opened the man’s eyes was a Sabbath. Therefore the Pharisees also asked him how he had received his sight. “He put mud on my eyes,” the man replied, “and I washed, and now I see.”

Some of the Pharisees said, “This man is not from God, for he does not keep the Sabbath.”

But others asked, “How can a sinner perform such signs?” So they were divided.

Then they turned again to the blind man, “What have you to say about him? It was your eyes he opened.”

The man replied, “He is a prophet.”

They still did not believe that he had been blind and had received his sight until they sent for the man’s parents. “Is this your son?” they asked. “Is this the one you say was born blind? How is it that now he can see?”

“We know he is our son,” the parents answered, “and we know he was born blind. But how he can see now, or who opened his eyes, we don’t know. Ask him. He is of age; he will speak for himself.”  His parents said this because they were afraid of the Jewish leaders, who already had decided that anyone who acknowledged that Jesus was the Messiah would be put out of the synagogue.  That was why his parents said, “He is of age; ask him.”

A second time they summoned the man who had been blind. “Give glory to God by telling the truth,” they said. “We know this man is a sinner.”

He replied, “Whether he is a sinner or not, I don’t know. One thing I do know. I was blind but now I see!”

Then they asked him, “What did he do to you? How did he open your eyes?”

He answered, “I have told you already and you did not listen. Why do you want to hear it again? Do you want to become his disciples too?”

Then they hurled insults at him and said, “You are this fellow’s disciple! We are disciples of Moses! We know that God spoke to Moses, but as for this fellow, we don’t even know where he comes from.”

The man answered, “Now that is remarkable! You don’t know where he comes from, yet he opened my eyes. We know that God does not listen to sinners. He listens to the godly person who does his will. Nobody has ever heard of opening the eyes of a man born blind. If this man were not from God, he could do nothing.”

To this they replied, “You were steeped in sin at birth; how dare you lecture us!” And they threw him out.

Jesus heard that they had thrown him out, and when he found him, he said, “Do you believe in the Son of Man?”

Jesus said, “You have now seen him; in fact, he is the one speaking with you.”

Then the man said, “Lord, I believe,” and he worshiped him.

Jesus said, “For judgment I have come into this world, so that the blind will see and those who see will become blind.”

Some Pharisees who were with him heard him say this and asked, “What? Are we blind too?”

Jesus said, “If you were blind, you would not be guilty of sin; but now that you claim you can see, your guilt remains.

The movie, Mary Magdalene (2018), is about Jesus. When the actor portraying Jesus, Joaquin Phoenix, was asked about this miracle from John 9, he reported deciding to rework the scene because the scriptural depiction was a “horrible introduction to seeing.”1 Logically, he is right. Even two thousand years before there was really a good understanding of germ-theory, people still probably had a pretty good idea that dirt was, well, dirty.

But what this actor does not seem to know is that Jesus did everything with intention. He had performed other miracles without mud and saliva. He had performed miracles from a distance, through simple proclamations; He had even healed passively—simply being touched by a woman reaching out for the hem of His robe. So why the mud, why this time? What was His intention?

To make this question even more real, why the mud and why the pool of Siloam? It is believed that this initial encounter occurred at the Temple Mount. The pool of Siloam was on the other side of town, a trip that would have required the blind man to be led through the hustle and bustle of Jerusalem at festival time. For the blind man to obey Jesus, he had to act and without much certainty of what would happen at the other end. The passage does not record any real conversation between Jesus and the man at this point. Maybe he heard Jesus tell the disciples that He was the Light of the World, but even so, what does the concept of Light mean to a person born into the void of complete darkness? Blind obedience was required.

To me, the most surprising part of this story is not that Jesus used mud and saliva as part of the healing process, or that healing took place—the most surprising part of the story is the blind man’s response. Not only does he follow the commands of Jesus to go and wash, but he engages in great personal risk by telling others what has been done for him. He could have hidden, but he did not. He could have blame shifted like his parents, but he met Jesus’ adversaries face-to-face and spoke truth. He could have been satisfied with physical healing alone, but he was not. He chose to receive the fullness of what an encounter with Jesus brings, healing that goes deeper than skin and beyond physical vision. Healing that changes one’s trajectory.

For most of us, and on the face of it, it feels impossible to even imagine what was going on in this man’s mind. What led him to obey the direction of a man he did not know, could not see, and who had just done such an unusual act of putting mud over his eyes? When has God sent you to your own pool of Siloam, either through circumstances, or illness; through loss, or deep grief? When have you made your way through the chaos, experienced an unexplainable, even an illogical act of God, and journeyed to a place of promised and possibly unexpected healing? When we allow faith to enable us to follow God blindly—letting go of the outcomes and the end results—we will find that we receive much than that for which we initially came to Jesus. Abundantly more.

God, thank you for enabling us through faith. We often neglect that we are called into blind obedience. We ask that you help and guide us to step out in faith and trust you. Amen.

Beth Cook currently serves as Member Care Developer for the Global Ministries department of the C&MA Canada, after living with her family as an International Worker in the Silk Region from 2004-2015.  She currently resides in the Toronto area with her husband, John, and their three children.
Learn more