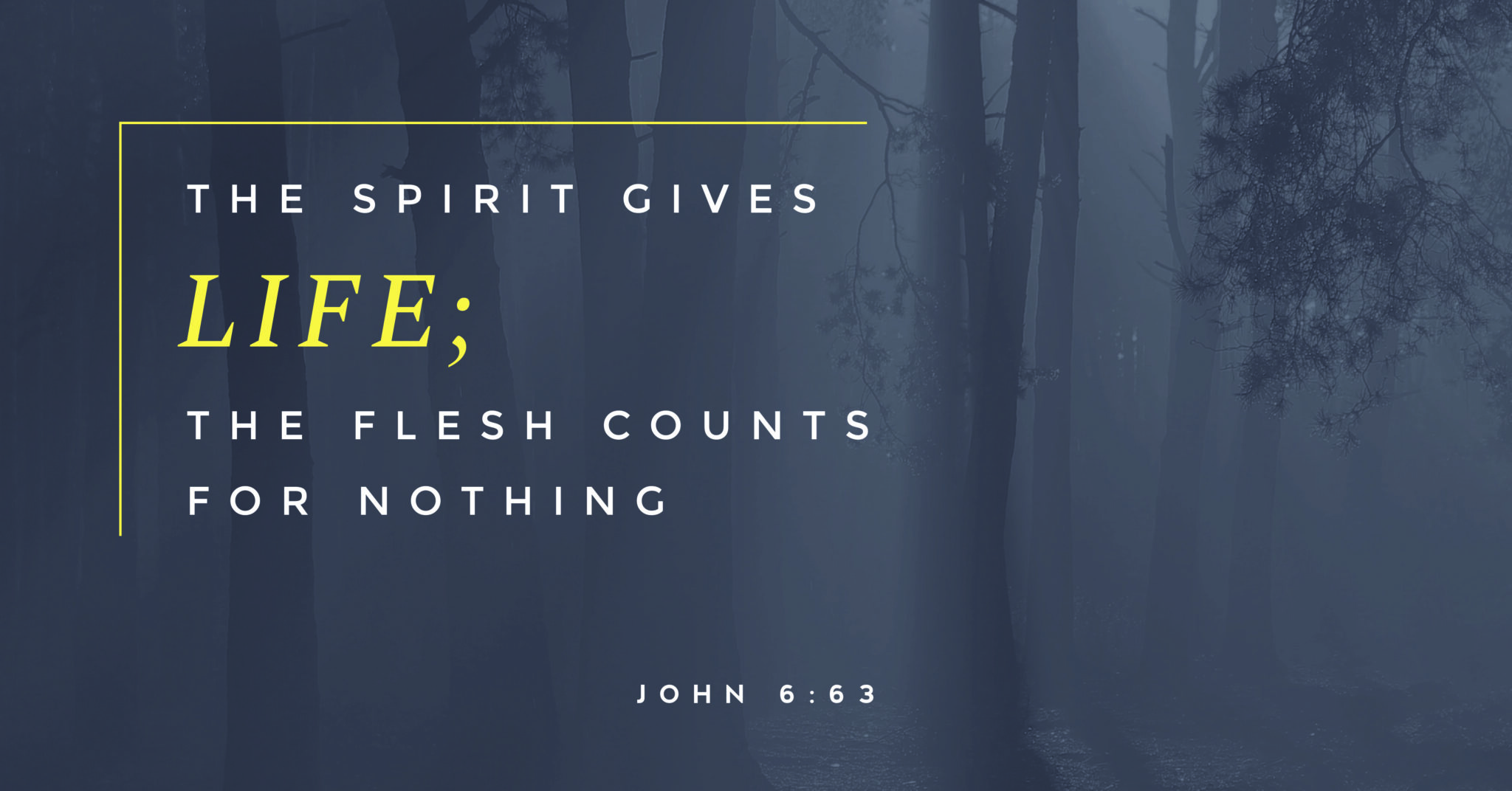 On hearing it, many of his disciples said, “This is a hard teaching. Who can accept it?”

Aware that his disciples were grumbling about this, Jesus said to them, “Does this offend you? Then what if you see the Son of Man ascend to where he was before! The Spirit gives life; the flesh counts for nothing. The words I have spoken to you—they are full of the Spirit and life. Yet there are some of you who do not believe.” For Jesus had known from the beginning which of them did not believe and who would betray him. He went on to say, “This is why I told you that no one can come to me unless the Father has enabled them.”

From this time many of his disciples turned back and no longer followed him.

“You do not want to leave too, do you?” Jesus asked the Twelve.

Simon Peter answered him, “Lord, to whom shall we go? You have the words of eternal life. We have come to believe and to know that you are the Holy One of God.”

Then Jesus replied, “Have I not chosen you, the Twelve? Yet one of you is a devil!”

Rejected! Abandoned! Unfriended! Betrayed! These words have applied to me and I can still feel the pain of some of those rejections. I would not be surprised if you have experienced this as well. I can identify with what you went through, but Jesus can identify even more!

This was not the crowd who showed up out of curiosity or to see the latest miracle. These were disciples. By now they had watched Him turn water into wine 1, heal a royal official’s son2, heal a man with a disability at the pool of Bethesda3, feed five thousand4 and other signs through which He revealed His glory5. Many of them had been baptized by Him6, some had been among those who baptized others in Jesus’ name7. They had been publicly identified as being on His side. Indeed, they were among those who intended to make Him king by force8. Until now.

Now there was pushback. But Jesus did not back down. He responded with grace and truth, “Does this offend you?” Just wait. You have not seen anything yet. These words may be hard, but they are life-giving. He called their bluff and forced them to look into the mirror: Your offense is not about me and my teaching. You are offended because you do not believe.

Now loyalty became disloyalty. Many “turned back and no longer followed him.” Jesus was unfriended—publicly!

Meanwhile the Twelve saw all this take place. Their own hearts resonated with those who pushed back: “This is a hard teaching.” So Jesus holds the mirror up to them. Decision time. “You do not want to leave too, do you?” The question was worded with the hope that the answer would be negative. But there was no coercion. Jesus held His disciples with an open hand. He knew they too could leave. In fact, if any decision to stay is to be real, the decision to leave must be an option. But the question was more for their sake than for His, “For Jesus had known from the beginning which of them did not believe and who would betray him.”

One by one they shook their heads. It was Simon Peter who put words to their decisions: “Lord, to whom shall we go? You have the words of eternal life. We have come to believe and to know that you are the Holy One of God.”

Although Simon Peter did not know it yet, Jesus knew that among the Twelve, among those who indicated that they were not leaving, was one who would ultimately abandon Him. Jesus called him a devil. We call him Judas. Although he was chosen by Jesus after a night of prayer to be one of the Twelve, Judas not only left, he did so with the ultimate betrayal. And Jesus also experienced that even confident Peter would deny Him. And Jesus, from the cross, cried out to His Heavenly Father “My God, my God, why have you forsaken me?”

Rejected? Abandoned? Unfriended? Betrayed? Jesus knows all about it. He really does!

Jesus, You have the words of eternal life. We are so thankful that You know all. Help us to make decisions that reflect our identity in You. Amen.

David Freeman is the Associate Pastor of Gateway Church in Caledonia ON. He has served the C&MA in denominational roles at the district and national levels, but loves helping people grow spiritually in the context of his church. He also loves being a grandfather to four wonderful pre-schoolers.
Learn more