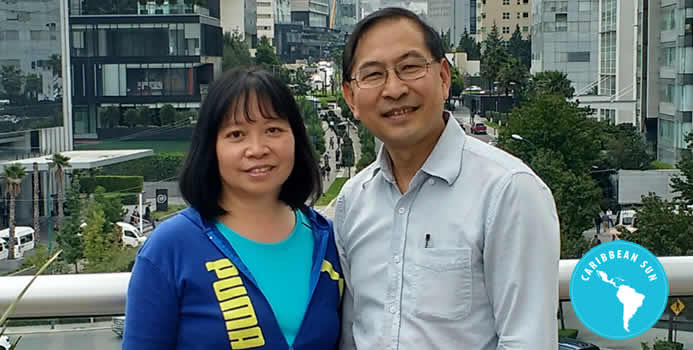 Victor was born in Guyana and worked the chemical engineering field over 25 years in Toronto. Betty was born in China and worked in cardiology and intensive care nursing for over 22 years in Toronto. By God’s grace in 1998, the Holy Spirit stirred their hearts to pursue Him and they walked into TJCAC with their two children. They were baptized in 1999. In 2005 at JMC, they responded to the call to serve full time in mission work. After seminary studies, they did their two year missionary apprenticeship at TAC from 2010 ministering to multi-ethnic groups in the heart of Toronto. After Spanish language studies, they served in Mexico City from 2013 and planted a local Alliance church with a Mexican couple. During home assignment in 2016; after much prayer and discernment they responded to planting the first Chinese Alliance Church to serve Chinese Professionals Mexico City (Mandarin) for their second term.

Our vision is to plant a discipling community among Chinese Professionals Mexico City (Mandarin), reaching and teaching them the good news, so that they will be ambassadors for Christ wherever God may lead them. This church plant will also serve to facilitate new work in Mexico City and beyond among this LRPG. Consumed by the Great Commandment, Compelled by the Great Commission, Completing our Kingdom Calling. In every effort, discipling people to be a transforming presence among the least reached.

Chinese professionals in Mexico are increasing as trade relations grow and Mexico City is one of the major receivers of them. There is no church dedicated to reaching this LRPG who come on short term contracts of 2-3 years. There is also increasing Chinese immigrant population and second generation Chinese professionals that do not fit with existing Chinese churches (only 2). After praying and prayer walking about location of a new Chinese church plant, God is calling us to focus our main effort in the Santa Fe area first where there is a large concentration within a small closed community. Helping them immerse and function in the Mexican culture allows us to fill a need.

Pray for relational building that leads to spiritual discussions as we live in community. Pray for open doors and access to common use areas within different building complexes. Pray for our witness and testimony as ambassadors for Christ and for community transformation as we live out the Christian life.

We are so thankful for many that support us through prayer that sustains the work that we are called to do. To sign up for our prayer letter, please contact us at victor.chin60@gmail.com to sign up.