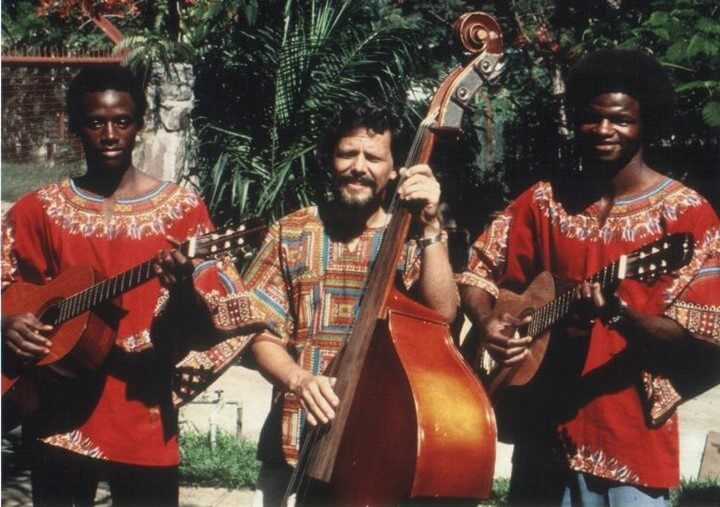 The Sango Malamu Trio (later known as the Kinshasa Band I and II) travelled together ministering in worship evangelism all over the area of Kinshasa, the Bas-Zaire, in several other provinces of the nation, and in other nations of West Africa. We made three trips across Canada and the USA, and one trip to Europe sharing what missions had accomplished in Zaire.

The Sango Malamu Trio was the first of its kind in Zaire—singing and playing their own instruments. We did that for 10 years and had the privilege of reaching hundreds of thousands for Jesus. The venue didn’t matter: from the smallest remote village of 30 people to the 120,000 who crowded into the largest stadium in Kinshasa it was Christ Jesus as Lord whom we preached. We were just servants leading people in worship of our Saviour and, through this worship, paving their way to freedom in Him…

…It took us a while to get there, but we arrived in midafternoon and immediately started to set up in a clearing at the centre of the village. I asked some of the locals if the people had ever heard the Gospel message or heard about Jesus before. They said no.

I never thought I would have the privilege of bringing the Gospel to people who had never heard of Jesus before. This day of ministry suddenly took on new meaning and excitement. When we started to play and sing, it didn’t take long for the whole village to come out. By the time we finished, it was dark, and we showed the JESUS film in a language they could understand. Then our evangelist preached for almost an hour.

The invitation was given, “If you understood the message and the film and you want to stay and pray with us and receive this message of Jesus, we will pray with you. The rest of you can go to your homes.”

We started to play again, just softly, to send off the people with a little bit of music, but nobody moved. You would think after four hours that they had had enough, but they all just sat there. We said it again. This time more forcefully. Again, nobody moved. It happened a third time before it finally hit us. The evangelist said, “Do you all want to receive this message, and do you all want to pray and receive Jesus into your lives?” There was a resounding “Yes!”

What an exhilarating experience to pray deep into the night with the whole group and then on a one-to-one basis with many. The whole village accepted Jesus into their lives that night. Sins were confessed and forgiven, angels were rejoicing in Heaven and we came home very late, tired, but happy! What an experience to share the good news of Jesus with those who had never heard it before and then for them to accept that message as an entire village!  It was a night we will never forget!