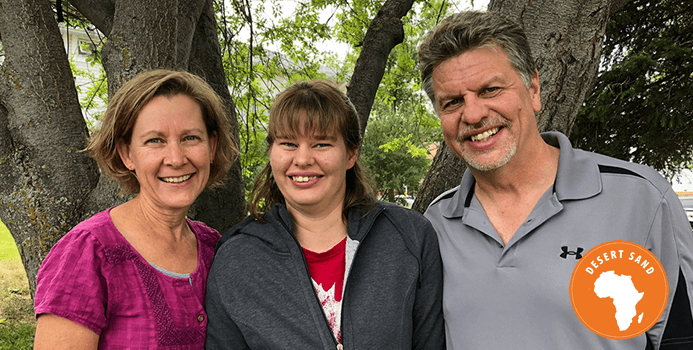 Richard accepted Christ as his Saviour when he saw the change in his parents’ lives after a small plane crash nearly took his dad’s life. Even before he knew Jesus, God gave Richard a vision that one day he would be bringing God’s word to people overseas. Merinda accepted Christ at the age of five and was encouraged by her parents to get to know and be involved with missions and missionaries during her growing up years. During junior high she committed to serve God overseas. After getting married, and welcoming two children, Elliot and Jenissa, into their family, Richard and Merinda have served in Ivory Coast, Quebec, and are presently regional developers in the Desert Sand, Africa, serving and leading the C&MA worker teams in bringing access to Jesus to the least reached.

Our vision is for people across the Desert Sand to have access to Jesus, have the opportunity to follow Him, be discipled, and gather in faith communities. We long for people’s lives to be transformed to bring glory to the Father.

We serve the international workers in the Sand in administration, pastoral care, strategic planning, and resourcing so they can extend God’s truth and hope in all aspects of least-reached people’s lives. On home assignment we connect with churches and supporters encouraging them with what God is doing in Africa.

Pray for wisdom and discernment as we serve the international workers in the Desert Sand.

Pray for people in the Sand to realize their need for Jesus and follow Him.

Pray for people to say yes to God and join the work in the Sand to bring access to Jesus for the least-reached.

Thank you so much for you prayers and support. At your request we will gladly send you our Enns News and Sand Paper monthly updates. You can contact us at sandcrd@gmail.com