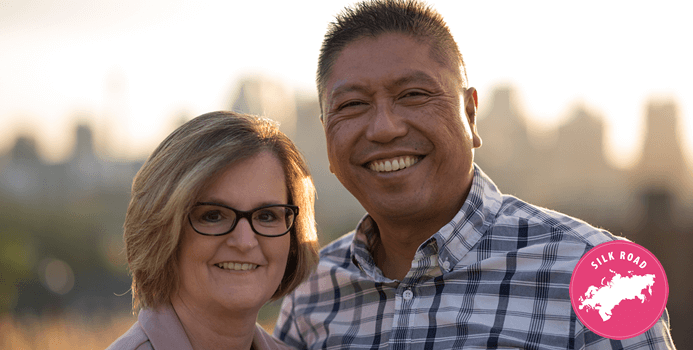 Rahul grew-up a Roman Catholic in the Philippines. Despite surrendering his life to Jesus in his late teen years, after immigrating to Canada in 1983, Rahul returned to his old lifestyle of drug and alcohol abuse. In 1985, he rededicated his life to Jesus at a C&MA church. Since then, Rahul has continued to love and walk with Jesus.

Dawna was raised in a Christian home. At a young age, she made a commitment to follow Jesus. In her teenage years, she witnessed God’s power during a spiritual encounter at a camp she was attending which further convinced her to continue to follow and surrender her life to Christ. Since 1999, Rahul and Dawna have served as church planters among a least-reached people group in the Silk Road. From 2007-2015, they also served as co-Team Leaders. In June 2016, they became the Regional Developers (RDs) for the Silk Road responsible for providing pastoral care and strategic and administrative leadership for all the C&MA international workers in the region.

To encourage, strengthen, support, resource, challenge, and hold accountable Silk Road international workers to the vision of the C&MA as well as to their team and personal goals. Research new potential places of ministry among least-reached peoples and operationalize an engagement plan. Participate and contribute to the Global Ministries leadership team to cast vision, maintain least-reached people focus, and engage in strategic initiatives.

To continue to see our international workers loving Jesus, growing in their walk, effective in their ministry, and establishing discipling and reproducing faith communities among the least-reached peoples we are currently engaging in Europe, Central Asia, and the Middle East. To continue to hear God’s voice about future engagements.

Pray for wisdom and discernment to lead and support the Silk Road international workers.

Pray for strength and endurance for the extensive travel required by our role.

Pray for discipline and consistency in our devotions, prayer time, study of the Word, worship, observance of the Sabbath, and that we may maintain a healthy rhythm of work and rest.