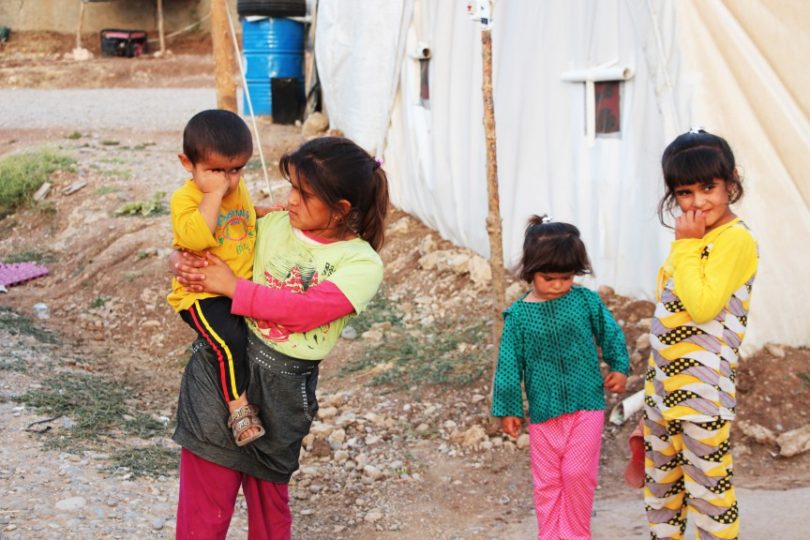 I’m posting this blog on October 11, the International Day of the Girl. A day established by the United Nations to draw heightened global attention to the discrimination and abuse that young girls uniquely face, and also to celebrate the resilience, achievements, and potential of girls.

Horror and Hope in Northern Iraq

The Day of the Girl focusses on the plight of millions of girls around the world. But today, I’m reminded of one in particular, a young Yazidi girl who I met in a refugee camp in Northern Iraq just a few weeks ago.

Her name is Suzanne and she is 14 years old. She told me and other delegates from C&MA a horrifying story. When she was just 11 years old, ISIS soldiers came to her village, killed the men, and kidnapped the girls and women. The young women were then divided into two groups: “pretty” and “not-so-pretty.” In polite but clear terms, this young girl described how the “pretty” girls were used as sex slaves for ISIS soldiers, while the “not-so-pretty” girls were forced into domestic slavery or had bombs strapped to them as ISIS and Iraqi soldiers went to war with each other. Over the next 3 years this young girl was passed between 17 different ‘owners’ (men) for the purposes of sex.

Even her rescue in Mosul at age 14 was not without trauma. Iraqi soldiers stormed the place where she was being held and killed 40 ISIS soldiers right in front of her. Two months after her rescue, Suzanne’s eyes are still red from all the tear gas. Today she is rescued but missing her other sister. She is currently trying to raise funds to buy her sister back from ISIS soldiers. She told us she is just one of 3,500 Yazidi girls who are experiencing a similar fate.

Imagine this young girl going through all of this and still finding her voice to speak up for so many other girls like her, including her sister. There’s that resilience the International Day of the Girl draws on – but there is also no question that this is a heart that only Jesus can heal and a reminder that He can move and touch hearts in any circumstance.

Because even in the midst of the genocide and other related horrors that Suzanne and so many other Yazidis are facing under ISIS, they are still seeking and turning to Jesus. As our workers and partners on the ground connect with Yazidis and show them the love and care of Jesus through local relief efforts, Yazidis are responding to the Gospel and are choosing Jesus.

Touching Hearts in Senegal, Too.

The Fulanis and Wolofs are the two largest people groups in Senegal today. They are also two of the world’s least reached people groups when it comes sharing to the truth of Jesus. In fact, in the 1930’s, a group of missionaries went to Senegal to share the Gospel with the Fulani people. When all their efforts yielded no result, they gave up. This group of people are too difficult to reach, they said. Impossible.

Something is happening here that has never happened before. More and more prominent and influential religious and community leaders are choosing to follow Jesus, even at great risk to their lives and the lives of their families.

While there a few weeks ago, I met and spoke with a highly respected religious leader who is also a wealthy businessman. He and his wife have struggled desperately to have children. He tried everything to remedy this situation. Going at first to different churches and organizations that promised him ‘miracles’ but in the end only took large sums of his money.

But in the process of his desperate searching, this influential religious leader also found Jesus and today he says even though he still has no children, “Jesus is enough for him.” This revelation has caused a ripple effect and he has gone on to lead another influential leader to Christ. This second leader is trusting and walking with Jesus even though his family and community have left him and burned his belongings. To this he only says, “They can take away my books, they can take away my influence, but they cannot take away Jesus.”

Another influential Fulani leader who has come to know Christ had his wife and children taken away from him and his wife married off to another man. Other leaders in Dakar meet in secret together to pray and strategize about more ways to bring the Gospel and love of Jesus to their people. They are even making use of new technologies with Bible scriptures and devotionals in the Fulani language.

Jesus is On Mission

The people I met in Senegal and Iraq shared horrifying stories. But they also inspired me with their resilience, their courage, their steadfast hope and trust in God – and even their joy – despite living through the worst of circumstances and with great risk. Jesus is moving and shaking in places and spaces across the globe and proving again and again that nothing is beyond His love and attention and His ability to draw people to Him.

Let these stories continue to move us to partner with Jesus – through our prayers, collective giving, or sending of workers – as He continues to build his church in war zones, refugee camps, and secret meeting houses. He is moving and the harvest is plenty.