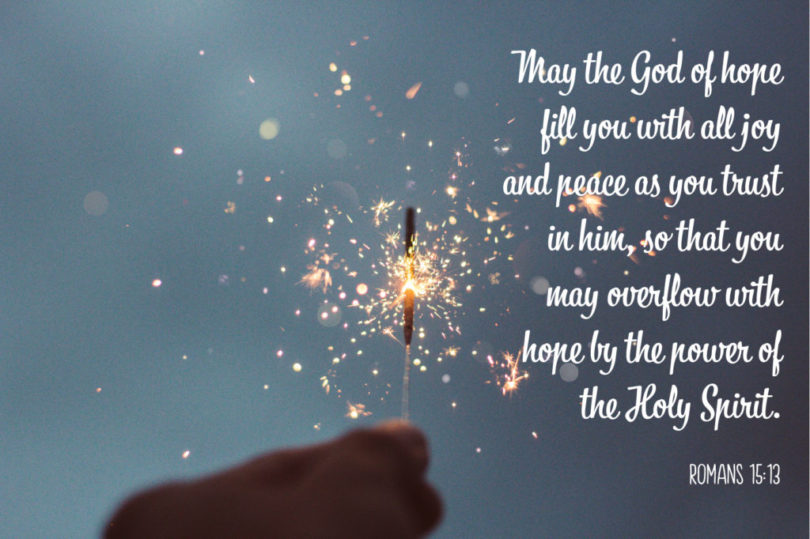 What is it that you are facing in this coming year? Where are the places of pain and ache in your heart? Are you starting a new year already defeated? I want to urge you to “take heart!” To not give up! And here’s why…

For the past two years I have carried a deep pain in my heart. It was in August 2015 that my youngest daughter, Emily, began a journey into the dark places of spiritual rebellion. Hoping to enjoy greater freedom, she soon discovered that, first of all, sin blinds and then very quickly sin binds. She spiraled down swiftly and as the layers of shame became thicker and thicker she was being suffocated by the consequences of sin. I would sit outside her bedroom door and plead with God to rescue her. Many times I was overwhelmed with despair and felt utterly hopeless.

Six months ago God spoke to my wife Agnes and told her to stop asking Him to rescue our daughter. Instead, she was to thank Him in advance for the work He was doing and to trust Him to complete that work. I was not so optimistic. As the months dragged on and the lies got bolder, I began to lose hope. I started to doubt God. Not His ability to rescue but His willingness to rescue. I could pray for others with incredible faith and hope, but I was sinking into deeper hopelessness when it came to my own daughter. I was becoming the father I never wanted to be…waiting by the phone in the early hours of the morning for the police to call and tell me my daughter was dead.

All that change a few months ago. It was a Saturday evening when our daughter announced she was going to church in the morning. It was a rare Sunday when I was not preaching anywhere so we decided to go with her. Earlier that Saturday I had installed a water filter and, at 2:00 Sunday morning, one of the connections came lose and began to flood our basement. My ninety-year-old mother, who lives in our basement, discovered the flood and began yelling, “I am drowning!” We all ran to the rescue and after three hours of clean-up, disaster was averted. My mother leaned over to Agnes and said, “Tell him to stick to preaching!” It was now 5:00 am and we were exhausted. I said to my daughter, “If you want to sleep in, I understand.” She boldly responded, “If you and mom want to sleep in, go ahead, but I am going to church!”

A few hours later we were sitting in church together as the pastor preached on 1 Corinthians 15:10, which declares, “By the grace of God I am what I am. God’s grace to me was not in vain.” It was God’s call to my daughter to come home. His grace forgives sin and removes shame. She opened her heart and said, Yes, Lord!”

Later that day we walked by her bathroom and noticed that she had written that verse on her mirror. The next day she confessed that she had gone out after church and got another tattoo. It was 1 Corinthians 15:10 engraved on her arm as a constant reminder of this moment of transformation. The past few weeks have been amazing as she is discarding the old life and embracing the grace of Jesus. She is still on the road to complete healing and restoration but she is now pointed in the right direction. Someone once said, “We can either stand in our brokenness and let Satan shame us, or stand in our brokenness and let Jesus love us!”

Jeremiah the prophet declared, “Ah, Sovereign LORD, you have made the heavens and the earth by your great power and outstretched arm. Nothing is too hard for you.”  (Jeremiah 32:17)

Be reminded, today, that God specializes in resurrections. He can bring life to dead relationships. He is the Creator; He can cause loving feelings and attitudes to be created out of nothing. He can transform people and situations in ways that we are unable to foresee. The God you serve is the God of miracles! God is able to do whatever it takes to fulfill His plan for you.

Keep praying, trusting, believing, praising and hoping. My prayer for you as we start a new year together is that, the God of hope will fill you with all joy and peace as you trust in Him, so that you may overflow with hope by the power of the Holy Spirit. – Romans 15:13 (NIV)

*Shared with permission and desire from Emily Hearn in the hopes her story will be an encouragement to you.