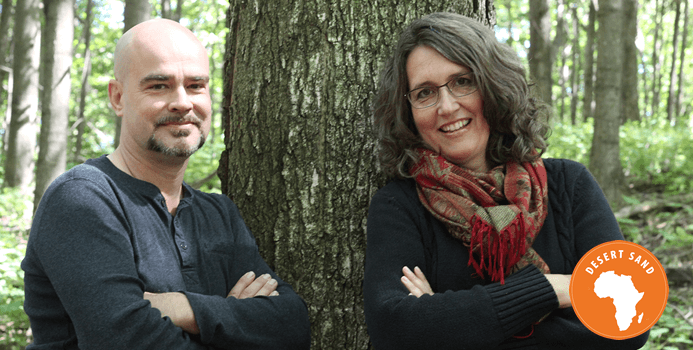 Michel is from a non-believing background, and experienced years of hopelessness in his life. At age 20, he attended a missionary conference in Kingston, and accepted Christ a few days later. God gave him a hope he had never had before. He was baptized and later heard the call to missions.

Denise grew up going to church and accepted Christ when she was 8. She went to Bible College which is where she heard God asking her to go into missions.

Michel and Denise served for 8 years in Québec as international workers before moving to Guinea in 2007. Michel is involved in evangelism. He meets with men individually and does group Bible Studies. Denise participates in his ministries and has also been training women in secretarial skills and other practical areas.

They love seeing God doing amazing miracles for and in people. It is thrilling to see God at work and people’s lives transformed.

We seek to help people rise from the mire of poverty via skill training, gain emotional healing, and enter a saving relationship with God through faith in Christ, being transformed through discipleship and established in faith communities.

Our priority is to train and equip new believers to be able to evangelize with Michel. This will include prayer ministry in various neighbourhoods in the city.

Another priority is to equip people to be able to support themselves and their families as we show them God’s love and grace.

We work with a unique group of LRPG’s called the Fula, Maninka,  Susu.

Pray that we will see people coming to faith and for true spiritual growth in maturity in believers and in the church.

We covet your prayers for our children who are “”alone”” in Canada.

We know there are many opportunities to give out there. We very much appreciate that you have chosen to give to us so we can continue our work in Guinea. Thank you and blessings on you.

We are thankful for your support. You can sign up for our prayer letter or contact us at dubemd@fastmail.fm