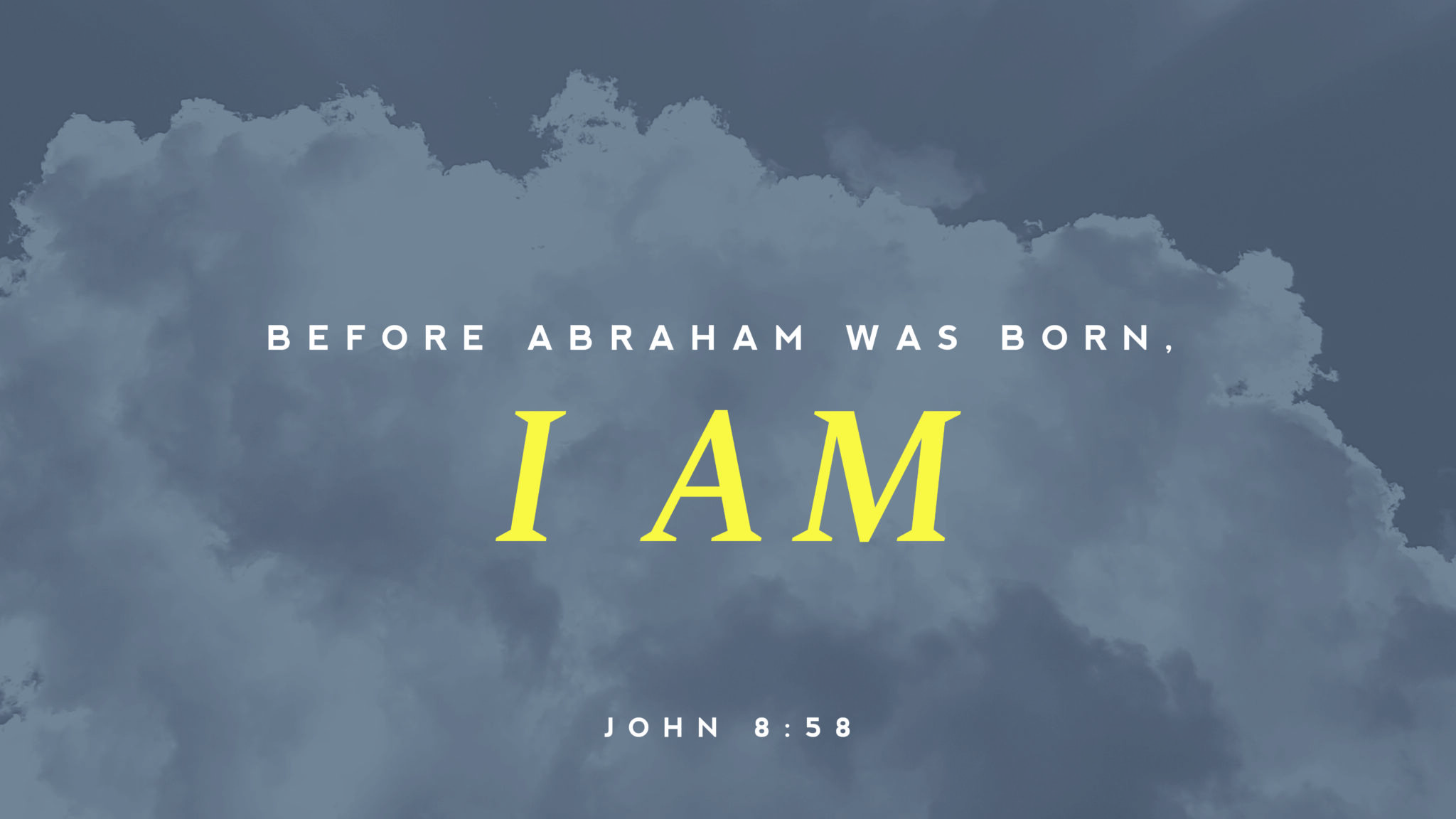 When Jesus spoke again to the people, he said, “I am the light of the world. Whoever follows me will never walk in darkness, but will have the light of life.”

The Pharisees challenged him, “Here you are, appearing as your own witness; your testimony is not valid.”

Jesus answered, “Even if I testify on my own behalf, my testimony is valid, for I know where I came from and where I am going. But you have no idea where I come from or where I am going. You judge by human standards; I pass judgment on no one. But if I do judge, my decisions are true, because I am not alone. I stand with the Father, who sent me. In your own Law it is written that the testimony of two witnesses is true. I am one who testifies for myself; my other witness is the Father, who sent me.”

Then they asked him, “Where is your father?”

“You do not know me or my Father,” Jesus replied. “If you knew me, you would know my Father also.” He spoke these words while teaching in the temple courts near the place where the offerings were put. Yet no one seized him, because his hour had not yet come.

Once more Jesus said to them, “I am going away, and you will look for me, and you will die in your sin. Where I go, you cannot come.”

This made the Jews ask, “Will he kill himself? Is that why he says, ‘Where I go, you cannot come’?”

“Just what I have been telling you from the beginning,” Jesus replied. “I have much to say in judgment of you. But he who sent me is trustworthy, and what I have heard from him I tell the world.”

They did not understand that he was telling them about his Father. So Jesus said, “When you have lifted up the Son of Man, then you will know that I am he and that I do nothing on my own but speak just what the Father has taught me.  The one who sent me is with me; he has not left me alone, for I always do what pleases him.” Even as he spoke, many believed in him.

To the Jews who had believed him, Jesus said, “If you hold to my teaching, you are really my disciples. Then you will know the truth, and the truth will set you free.”

They answered him, “We are Abraham’s descendants and have never been slaves of anyone. How can you say that we shall be set free?”

Jesus replied, “Very truly I tell you, everyone who sins is a slave to sin. Now a slave has no permanent place in the family, but a son belongs to it forever. So if the Son sets you free, you will be free indeed. I know that you are Abraham’s descendants. Yet you are looking for a way to kill me, because you have no room for my word. I am telling you what I have seen in the Father’s presence, and you are doing what you have heard from your father.”

“Abraham is our father,” they answered.

“If you were Abraham’s children,” said Jesus, “then you would do what Abraham did. As it is, you are looking for a way to kill me, a man who has told you the truth that I heard from God. Abraham did not do such things. You are doing the works of your own father.”

“We are not illegitimate children,” they protested. “The only Father we have is God himself.”

Jesus said to them, “If God were your Father, you would love me, for I have come here from God. I have not come on my own; God sent me. Why is my language not clear to you? Because you are unable to hear what I say. You belong to your father, the devil, and you want to carry out your father’s desires. He was a murderer from the beginning, not holding to the truth, for there is no truth in him. When he lies, he speaks his native language, for he is a liar and the father of lies. Yet because I tell the truth, you do not believe me! Can any of you prove me guilty of sin? If I am telling the truth, why don’t you believe me? Whoever belongs to God hears what God says. The reason you do not hear is that you do not belong to God.”

The Jews answered him, “Aren’t we right in saying that you are a Samaritan and demon-possessed?”

“I am not possessed by a demon,” said Jesus, “but I honor my Father and you dishonor me. I am not seeking glory for myself; but there is one who seeks it, and he is the judge. Very truly I tell you, whoever obeys my word will never see death.”

Jesus replied, “If I glorify myself, my glory means nothing. My Father, whom you claim as your God, is the one who glorifies me. Though you do not know him, I know him. If I said I did not, I would be a liar like you, but I do know him and obey his word. Your father Abraham rejoiced at the thought of seeing my day; he saw it and was glad.”

“You are not yet fifty years old,” they said to him, “and you have seen Abraham!”

“Very truly I tell you,” Jesus answered, “before Abraham was born, I am!” At this, they picked up stones to stone him, but Jesus hid himself, slipping away from the temple grounds.

“Jesus never claimed to be God in Bible, habibi.”

If you’ve ever sat down and chatted with a Muslim friend or neighbour, this is a sentence that you may have heard. From my teenage years, until my career life, it has been a phrase that has been repeated to me by classmates, colleagues, and very dear friends.

I remember the first time I heard this phrase. I was in Grade 9 and I was hanging out with one of my best friends. I was talking about the previous night’s youth group at my church, and in the middle of it all, he said: “You know, Jesus never claimed to be God in the Bible.”

I was caught off guard. He continued on: “Jesus says, He is the Way, or is referred to as a teacher, rabbi or prophet. But never did He literally state that He was God. In fact, every time He is asked if He is God, He dismisses the question!” Baffled and shocked I didn’t know what to say, because in some ways, he was right. And I kept thinking, ‘where in the Bible does it literally or clearly state that Jesus is God?’

In John 8, we see this similar dialogue playing out where Christ’s divinity is put into question by the religious leaders of His time. It all culminates in verse 25 to a poignant question asked by the Pharisees: “Who are you?”

Over the course of this dialogue, Jesus answers with different “I” statements describing Himself in a very clear manner. He declares Himself to be on a same divine level as the Heavens as the ‘light of the world’, standing with the Father, being from above, coming from God and being sent by Him, promising eternity, and being glorified by God. It seems clear that Christ is demonstrating His equal divinity with God, the Father. If that was not enough, the climax of the dialogue reaches one of Jesus’ clearest statement of being God in verse 58: “[…] before Abraham was born, I am!” echoing the Old Testament where God identified Himself as the great “I AM”. And if that wasn’t clear enough, we can see that the reaction of the Pharisees moves immediately to a violent response picking up stones to kill Jesus.

Even at that time, when Jesus told people that He was God, it caused many to question and react strongly against those statements. Even today, it’s hard for many to submit to such a truth.

Followers of Islamic teachings will vehemently affirm that Christ never proclaimed Himself as being divine, or as God. They will generally refer that the Quran (5.116–118) states that anyone who does not worship the one True God should be punished because of blasphemy.

The beauty of being in dialogue and constructive debate with others who aren’t followers of Christ gives us a chance to draw closer to Jesus. It pushes us to wrestle with facets of Christ’s divine personhood, especially if we’ve overlooked a part of it. It is an opportunity for us to better understand the depth of Christ’s divine identity, and to continue to ask that same question: “Who is Jesus?”. And what was true then, remains true today, Christ is our sovereign Lord and Saviour, the One who was and is to come, and forever will be.

Jesus, thank You for drawing us close to You. We pray that You give us  deeper understanding of who You are, and a yearning to know You deeper. Amen.

Ben is part of the Envision Team at the National Ministry Centre for the C&MA in Canada. A graduate of Alliance Theological Seminary (M.Div Missions and Intercultural Studies), he is passionate about influencing the next generation of global church leaders to serve God's mission. Ben’s diverse background includes architecture (M.Arch) and serving at an international church in Paris, France in worship and creative arts. He has lived in Canada, France, Hong Kong and the United States.  Ben is married to Irene and together, they enjoy museums, design, shopping, and conversations around great food.
Learn more