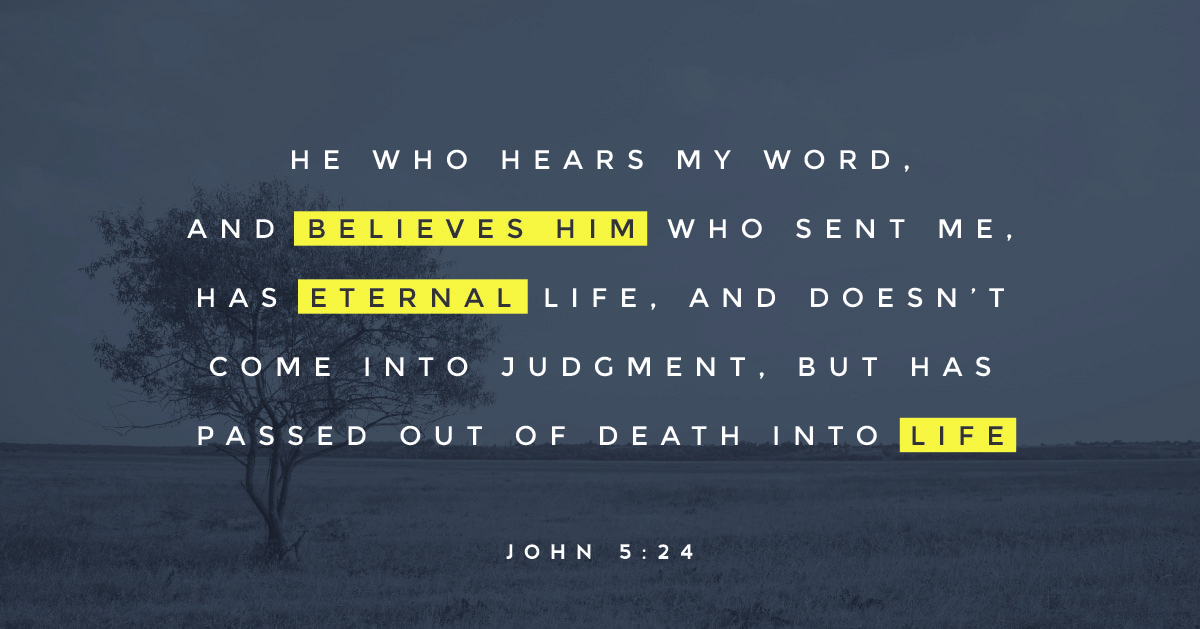 So, because Jesus was doing these things on the Sabbath, the Jewish leaders began to persecute him. In his defense Jesus said to them, “My Father is always at his work to this very day, and I too am working.” For this reason they tried all the more to kill him; not only was he breaking the Sabbath, but he was even calling God his own Father, making himself equal with God.

“Very truly I tell you, whoever hears my word and believes him who sent me has eternal life and will not be judged but has crossed over from death to life.  Very truly I tell you, a time is coming and has now come when the dead will hear the voice of the Son of God and those who hear will live.  For as the Father has life in himself, so he has granted the Son also to have life in himself.  And he has given him authority to judge because he is the Son of Man.

“If I testify about myself, my testimony is not true. There is another who testifies in my favor, and I know that his testimony about me is true.

“You have sent to John and he has testified to the truth. Not that I accept human testimony; but I mention it that you may be saved. John was a lamp that burned and gave light, and you chose for a time to enjoy his light.

“I have testimony weightier than that of John. For the works that the Father has given me to finish—the very works that I am doing—testify that the Father has sent me. And the Father who sent me has himself testified concerning me. You have never heard his voice nor seen his form, nor does his word dwell in you, for you do not believe the one he sent. You study the Scriptures diligently because you think that in them you have eternal life. These are the very Scriptures that testify about me, yet you refuse to come to me to have life.

“But do not think I will accuse you before the Father. Your accuser is Moses, on whom your hopes are set. If you believed Moses, you would believe me, for he wrote about me. But since you do not believe what he wrote, how are you going to believe what I say?”

After Jesus miraculously healed an ill man at the pool, the Jewish leaders accused Him for healing on the Sabbath and attacked Him for calling God His “Father”. In this passage, Jesus defends His source of authority from the Father who sent Him. To prove His authority, Jesus offers three witnesses: a human (John the Baptist), the works of wonder (from God himself), and the Holy Scriptures (given by Moses). Jesus rebukes the Jewish leaders for they had three testimonies and still refused to accept Him as the Giver of Life. Why would they not believe? Jesus proposes three reasons: they do not have the love of God in their hearts, they do not seek the glory of God, but the glory of other humans, and they think that the Scriptures themselves possess eternal life. Instead of recognizing the miracle of the simple ill man at the pool who picked up his mat and walked away healed, they preferred to glorify John the Baptist, rather than the miraculous works of God.

Today, the testimonies of humans (pastors, missionaries, evangelists and every disciple of Christ), the action of God (through the church, answers to prayers, miracles, healings) and the teachings from the Bible should all point to one person: Jesus. Despite all of these, can we still miss the point? The risk is to leave a church service saying, “What a good sermon!” or “The pastor is so good!” The purpose of the Gospel is to look at Him and live, not to stop at the pole that points to Him and worship it, “Just as Moses lifted up the snake in the wilderness, so the Son of Man must be lifted up, that everyone who believes may have eternal life in him” (John 3:14).

God, help us to be like John the Baptist, a lamp that burns and gives Your light. Help us to worship the Healer and not the works of healing.1 Help us to use the Scriptures, not thinking that studying them diligently is enough,2 so that we will not know more about You, but know You more! Amen.

Irene is a student McMaster University working towards a PhD in Early Christianity, with a minor in Early Judaism, focusing her work on the interpretation of the Hebrew Bible in the New Testament. Her mother tongue is French, as she was born and raised in Paris, France, though she grew up in a Cantonese-speaking family. She pursued her masters in Nyack, NY.
Learn more