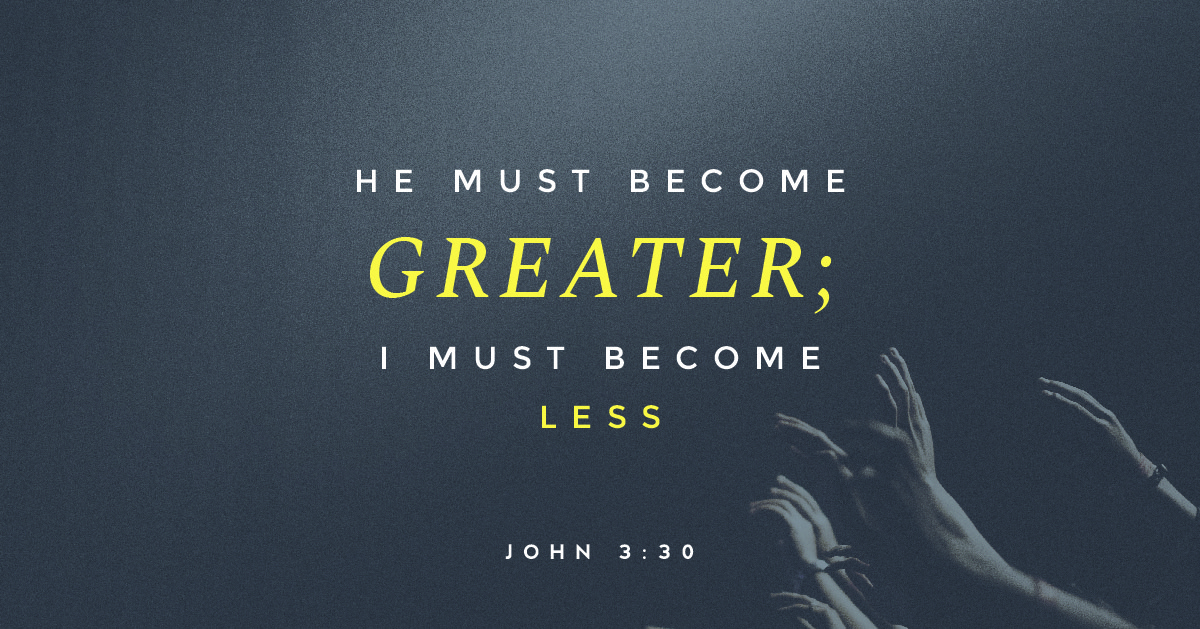 After this, Jesus and his disciples went out into the Judean countryside, where he spent some time with them, and baptized. Now John also was baptizing at Aenon near Salim, because there was plenty of water, and people were coming and being baptized. (This was before John was put in prison.) An argument developed between some of John’s disciples and a certain Jew over the matter of ceremonial washing. They came to John and said to him, “Rabbi, that man who was with you on the other side of the Jordan—the one you testified about—look, he is baptizing, and everyone is going to him.”

To this John replied, “A person can receive only what is given them from heaven. You yourselves can testify that I said, ‘I am not the Messiah but am sent ahead of him.’  The bride belongs to the bridegroom. The friend who attends the bridegroom waits and listens for him, and is full of joy when he hears the bridegroom’s voice. That joy is mine, and it is now complete. He must become greater; I must become less.”

The one who comes from above is above all; the one who is from the earth belongs to the earth, and speaks as one from the earth. The one who comes from heaven is above all. He testifies to what he has seen and heard, but no one accepts his testimony. Whoever has accepted it has certified that God is truthful. For the one whom God has sent speaks the words of God, for God gives the Spirit without limit. The Father loves the Son and has placed everything in his hands. Whoever believes in the Son has eternal life, but whoever rejects the Son will not see life, for God’s wrath remains on them.

I heard about a groom who decided to give his brother the role of being the best man. At the reception, the time came for the best man to make a toast to the happy couple.

He stepped up to the microphone and started by saying what a lucky guy his brother was to have such a wonderful wife. So far so good. Then the best man mentioned that his brother had always been the lucky one and that he had never been as popular as his brother. This got to be a bit uncomfortable.

The best man went on to accuse his parents of always liking his brother better and giving him more gifts. He went on like this for a good ten minutes until he started crying. One family member had to take the microphone from his hand. Another grabbed him and led him outside. The room was silent.

The reason the situation was so uncomfortable is because, as we all know, the primary job of the best man at a wedding is not to point attention to himself, but to bring honour to the bride and groom!

In John 3:22-36, the story is told of John the Baptist’s reaction to Jesus’ increasing popularity. Some of John’s disciples were concerned, saying, “…everyone is going to him” (John 3:26). John replied with these famous words, “The bride belongs to the bridegroom. The friend who attends the bridegroom waits and listens for him, and is full of joy when he hears the bridegroom’s voice. That joy is mine, and it is now complete. He must become greater; I must become less” (John 3:28-30).

John was aware that, like the best man at a wedding, his job is not to bring attention to himself but to honour the groom—Jesus—and ensure He connects with His bride—the church. He was thrilled to slide into the background if that meant the groom and His bride could take centre stage.

For those of us who serve in the local church, the same choice is put before us every day. Will I put my preferences first or will I set them aside for the sake of unity? Will I ensure that my opinions are honoured above others or will I discern what Jesus wants for His bride? Will I put my needs first or will I consider the greater good?

As a pastor, it is easy for me to get confused about this. My temptation is to preach and lead in such a way that people look at me. I am happy when people leave a Sunday service and talk about how well I performed in the pulpit. But I must remember that my job, like the best man at a wedding, is not to steal the affections of the bride but to help her connect to the groom. He must become greater; I must become less.

In my role as a pastor, I have also witnessed Christians who fail to see themselves as the best man. Not unlike the best man in the story above, they bring attention to themselves, create disunity, insist that things be done their way and are reluctant to work out problems in a spirit of humility and submission. Constantly threatening to resign from ministry or leave the church if they do not get their way, this attitude reveals an unwillingness to realize that we are not the groom!

Jesus, make us people who see ourselves as John saw himself. We ask that you remind us, and other Christians, of John’s wonderful words “He must become greater; I must become less” (John 3:30). Amen.

Steve Kerr is the Senior Pastor of Gateway Church, a church-planting Alliance church in the Hamilton area. Steve lives in Caledonia, Ontario with his wife, Christa and two children, Emma and Ethan. For more information about Gateway, go online to www.gw.church
Learn more