On the third day a wedding took place at Cana in Galilee. Jesus’ mother was there, and Jesus and his disciples had also been invited to the wedding. When the wine was gone, Jesus’ mother said to him, “They have no more wine.”

“Woman, why do you involve me?” Jesus replied. “My hour has not yet come.”

His mother said to the servants, “Do whatever he tells you.”

Nearby stood six stone water jars, the kind used by the Jews for ceremonial washing, each holding from twenty to thirty gallons.

Jesus said to the servants, “Fill the jars with water”; so they filled them to the brim.

Then he told them, “Now draw some out and take it to the master of the banquet.”

They did so, and the master of the banquet tasted the water that had been turned into wine. He did not realize where it had come from, though the servants who had drawn the water knew. Then he called the bridegroom aside  and said, “Everyone brings out the choice wine first and then the cheaper wine after the guests have had too much to drink; but you have saved the best till now.”

What Jesus did here in Cana of Galilee was the first of the signs through which he revealed his glory; and his disciples believed in him.

After this he went down to Capernaum with his mother and brothers and his disciples. There they stayed for a few days.

It was the summer of 1984. I had resigned from my job with Atomic Energy of Canada in 1980 and had been a preaching pastor at Rexdale Alliance Church for over three years. I took a two-month leave of absence and went home to visit my family in the city of New Delhi, India. For six weeks, as I walked almost daily among the masses, most of whom were also manifestly poor, I struggled increasingly with two issues; most of these people might never hear the Gospel and those who do will most likely not understand. (At the time my own parents had heard the Gospel from me for 21 years and it had not made any impact at all).  As our trip was nearing the end, I decided that what I was being called to do in Rexdale was completely meaningless; given the massive needs of the world. I seriously considered returning to Toronto, resigning from my church and trying to return to my position with Atomic Energy of Canada.

My wife and I went to church on the morning of our last Sunday in Delhi. The service did nothing to change my frame of mind. I was still engulfed in pessimism because of the apparent irrelevance of the Gospel to global needs as well as my calling as a pastor. I went to church that Sunday evening by myself, mostly by force of habit. The guest preacher was the president of Wycliffe Bible translators—an organization that recruited people to translate the Bible into the various languages of the world. He began by saying, “I want to speak today to full-time workers.” Now all the “full-time workers” in the church were on the platform except for me. It seemed like this total stranger was saying, “Sunder, I have something to say to you today.” I sat up. His next words jerked me to upright attention when he asked this question, “Has the joy run out of your life?” Here I was, likely the only full-time worker sitting in the congregation whose joy had run out. The preacher then reads John 2:1-12, the well-known story of Jesus’ first miracle—turning water into wine at a wedding feast when all the wine had run out.  He then made four statements based on that story.

He then concluded the message by telling story after story of Wycliffe Bible translators who had persevered for years with almost no sign of any fruit until a sudden explosion of conversions in response to the passages of Scripture, they had been translating all these years. I stood up, a completely transformed man, returned the next day to Toronto to resume my ministry, continuing at Rexdale for another 32 years, making over 60 different overseas trips to 18 different countries, 14 of them to India—all because of a penetrating meditation on John 2:1-12. The first “sign” that Jesus did to manifest His glory did it again 2000 years later. I shudder to think what might have happened if I had decided not to go to church that Sunday evening. The entire trajectory of my life might have been different, and my loss would have been inestimable.

Jesus, we ask that Your Spirit will keep revealing Your worth and glory to us. We ask for perseverance in serving You in the face of human needs. Amen. 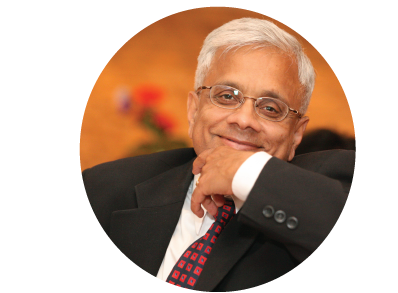 Sunder Krishnan grew up in New Delhi. He graduated from the Indian Institute of Technology; and received his master’s degree in Mechanical Engineering from the Massachusetts Institute of Technology. From 1969-1980 he worked with Atomic Energy of Canada and then he joined the pastoral staff of Rexdale Alliance Church where he served until 2016. Sunder and his wife, Shymala, have two married children, Vijay and Sheila and six grandchildren.