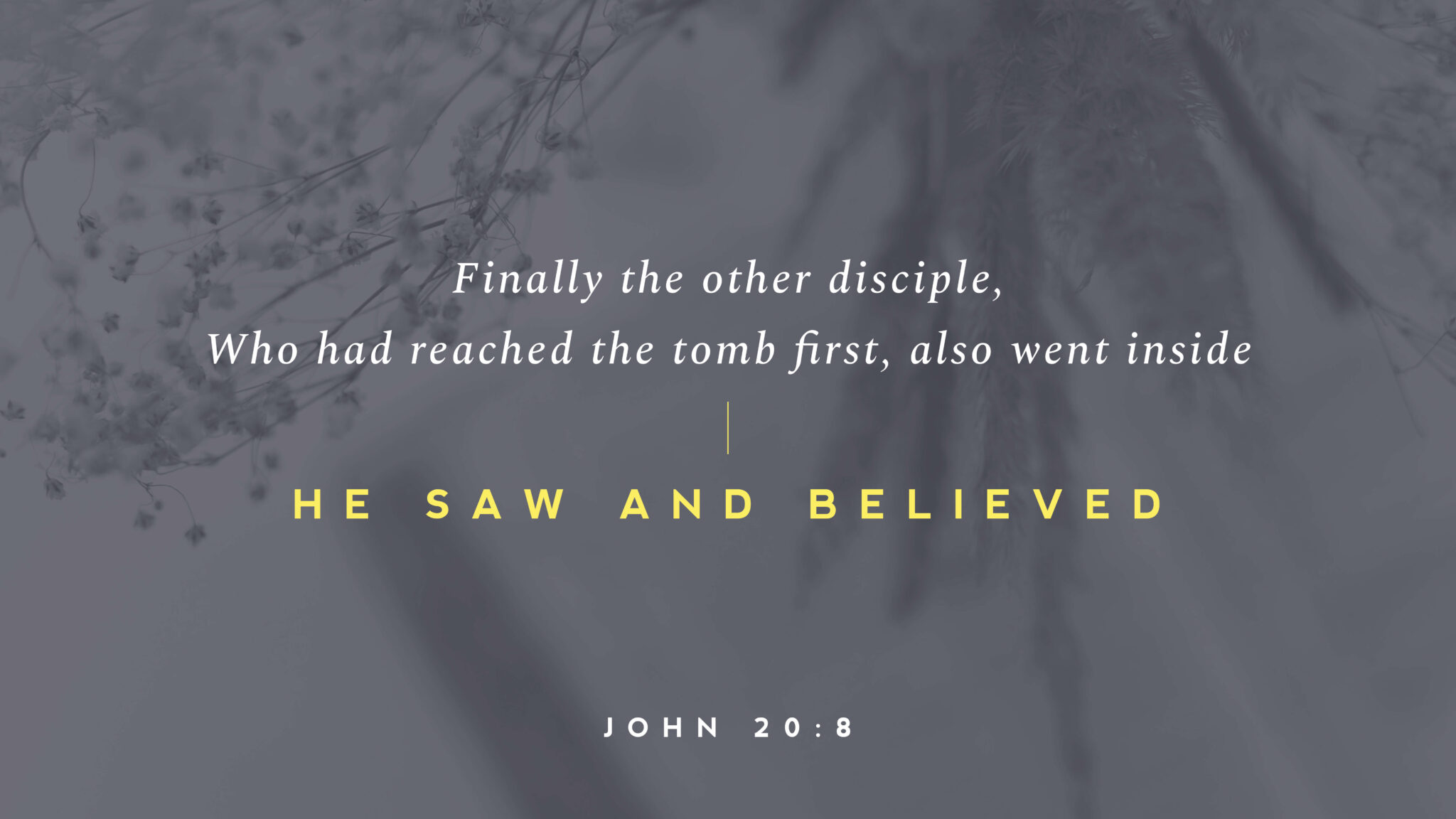 Early on the first day of the week, while it was still dark, Mary Magdalene went to the tomb and saw that the stone had been removed from the entrance.  So she came running to Simon Peter and the other disciple, the one Jesus loved, and said, “They have taken the Lord out of the tomb, and we don’t know where they have put him!”

So Peter and the other disciple started for the tomb.  Both were running, but the other disciple outran Peter and reached the tomb first. He bent over and looked in at the strips of linen lying there but did not go in. Then Simon Peter came along behind him and went straight into the tomb. He saw the strips of linen lying there,  as well as the cloth that had been wrapped around Jesus’ head. The cloth was still lying in its place, separate from the linen. Finally the other disciple, who had reached the tomb first, also went inside. He saw and believed.  (They still did not understand from Scripture that Jesus had to rise from the dead.)  Then the disciples went back to where they were staying.

John writes his Gospel so that we might “believe that Jesus is the Messiah, the Son of God, and that by believing [we] may have life in his name” (John 20:31). Belief in Jesus is what John invites us to carefully consider. In John 20:1-10, belief is working out in the dawn of new creation.

New creation begins “early on the first day of the week” (John 20:1). To encourage belief in new creation, John points us to three people and their reaction to Jesus. John reveals new creation through the eyes of Mary Magdalene, Simon Peter, and the “other disciple, the one Jesus loved” (John 20:2).

Belief in new creation is personal and unique. Mary, Peter, and the beloved disciple all respond differently as new creation was dawning. What was their response?

Mary’s response was alarm. At this point in the narrative, Mary is not aware that Jesus is alive. For Mary this is concerning, “they have taken the Lord out of the tomb, and we don’t know where they have put him” (John 20:2). We learn from Mary that belief in new creation is always a radical upheaval. The regular routines of death have been interrupted. The surety of a body left in a tomb is no longer sure. Jesus’ body is missing and so Mary runs to her community to report the troubling news.

Peter’s response was a probing interest. John tells us Peter “saw the strips of linen lying there, as well as the cloth that had been wrapped around Jesus’ head. The cloth was still lying in its place, separate from the linen” (John 20:6-7). Peter focuses on the garments of death which had been carefully set aside. The accuracy of the description suggests how important this was for Peter. Mary was right, Jesus’ body is missing, but the tomb is not empty, the garments of death are left in the empty tomb. The belief that is emerging in Mary and Peter is being carefully developed by John as the narrative unfolds. They were being confronted with the greatest event of human history.

The beloved disciple’s response was belief. John knows precisely when this disciple believed in Jesus. He steps in the tomb and “he saw and believed” (John 20:8). The empty tomb is now filled with belief. Life and belief are filling the place of loss and death. This is belief in new creation.

It is Jesus who personally and uniquely met Mary, Peter, and the beloved disciple to guide their response to mature belief. For Mary it was when she heard Jesus say her name, “Mary” (John 20:16). For Peter it was over breakfast as Jesus healed his denial and restored his ministry.1 For the beloved disciple it was right here in the “empty” tomb.

We too can expect Jesus to guide our belief as He, by the Holy Spirit, draws us into the abundant life of His Father’s Kingdom.

Dear God, thank You for drawing us into the abundant life of Your Kingdom. We ask that You continually make us aware of the new creation. Amen.

Jim Horsthuis is the Academic Director of the Pathways School of Ministry in the Central Canadian District of the C&MA in Canada. He has served as a pastor, chaplain, and theological educator in a variety of different context throughout Canada. His research interests include pastoral theology, the doctrine of the Trinity, and Christian spirituality. He is married to Laura and they have two grown children, Josh and Jenna.
Learn more