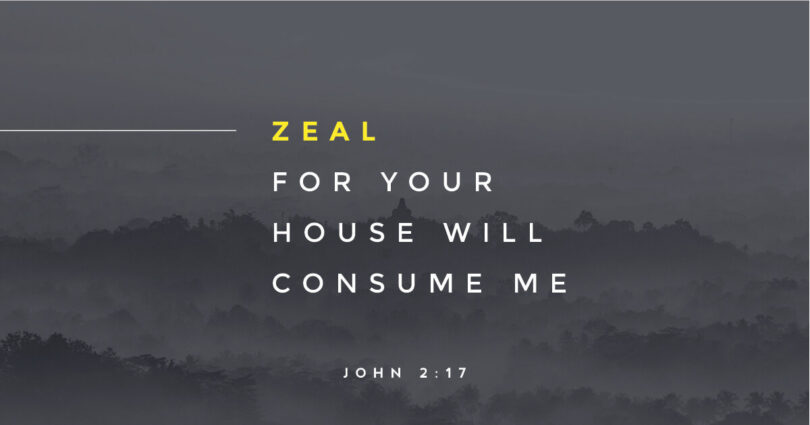 When it was almost time for the Jewish Passover, Jesus went up to Jerusalem. In the temple courts he found people selling cattle, sheep and doves, and others sitting at tables exchanging money. So he made a whip out of cords, and drove all from the temple courts, both sheep and cattle; he scattered the coins of the money changers and overturned their tables.  To those who sold doves he said, “Get these out of here! Stop turning my Father’s house into a market!”  His disciples remembered that it is written: “Zeal for your house will consume me.”

The Jews then responded to him, “What sign can you show us to prove your authority to do all this?”

Jesus answered them, “Destroy this temple, and I will raise it again in three days.”

They replied, “It has taken forty-six years to build this temple, and you are going to raise it in three days?” But the temple he had spoken of was his body. After he was raised from the dead, his disciples recalled what he had said. Then they believed the scripture and the words that Jesus had spoken.

Now while he was in Jerusalem at the Passover Festival, many people saw the signs he was performing and believed in his name. But Jesus would not entrust himself to them, for he knew all people. He did not need any testimony about mankind, for he knew what was in each person.

Cryptic, scary, whip-wielding Jesus—just when you think you might have Jesus figured out, He braids His whip, runs around the Temple courts, flips tables, herds animals, evicts merchants, and gives mysterious answers to the authorities. In this seemingly chaotic moment, nobody seems to understand what is going on until, after Jesus’ resurrection, when they recall this event.

As modern readers, when we read this, we need to look at the context because the gospel author deliberately included this portrait of Jesus. John spent the entire first chapter laying out this theme: Jesus was the Passover lamb who takes away the sins of the world and that anybody who believes in Him can join the family of God.1

At the beginning of the Passover week, everybody is busy cleaning the nooks and crannies of their homes to get all the yeast and leaven out. This holiday tradition is not just for show, it is a God-mandated deep clean3 , and while everyone is cleaning their own houses, Jesus is bothered by the mess in God’s dwelling place.

It would be as if the back rows of your church doubled as a flea market during Sunday service. Can you imagine, there you are in the back of the church, segregated by race and gender, trying to sing Good Good Father, but the people behind you are loudly haggling over the exchange rate for the offering plate. The sound of squawking birds and the stench of soon-to-be-slaughtered goats would be rather distracting.

Imagine now that you are a first century Gentile and you have walked hundreds of miles to Jerusalem for Passover and the only space you are permitted to encounter God is a busy, dirty flea market. Jesus shows up on the scene with a whip and He clears His Father’s house out completely. For the first time in a long time, there is actually space for silence, prayer, worship—and most importantly—space made just for you. Jesus, who is permitted to the deeper levels of the Temple and intimacy with God, is there in the outer edges. He seems to care for people like you.

The important part of this story is that Jesus does not just clean His own house because the law requires Him to. His actions were not just some religious pageantry to sweep the house before family shows up for the holidays.

When the religious leaders and lawyers got upset at Jesus for this act, He started talking about a different Temple. They demanded proof and Jesus spoke of a new system that was coming, one that they did not have a grid for.

This other Temple, the body of Christ, would be a lot like the temple in Jerusalem because the very presence and Spirit of the Living God would dwell there. But nobody understood it until after the resurrection, that this profound mystery Jesus was talking about, the body of Christ, and ultimately the Church, would be the new Temple and that it would be a place that was open to everyone who believes in Him.

When was the last time you deliberately made space for God in your life?

Is there something you can do for somebody else, so they might have the space or capacity to meet with God?

4 The Temple courts were divided into different sections, from holiest to least holy: the Holy of Holies, the priestly courts, the court of Israel (Jewish men only), The Court of Women (Jewish women, lepers, the sick and lame, etc.), and the Court of Gentiles is outside. “Often the Court of the Gentiles was considered as more of a social market place with vendors selling souvenirs, sacrificial animals, food as well as there being currency changers present.” Entering the wrong court could be punishable by death! http://gospelsmuseum.div.ed.ac.uk/exhibits/show/court-of-the-gentiles/temple-overview

Jesus, open our eyes to where we have built up religious systems that exclude people from experiencing You. Amen. 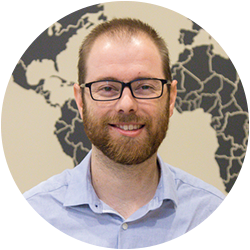 Eric Crow is the Brand and Design Coordinator at the National Ministry Centre for the Christian and Missionary Alliance in Canada. Eric and his wife, Emily, have an adorable baby boy, Ezekiel. Eric enjoys biking, drinking kombucha, and cheering for the Toronto Raptors.