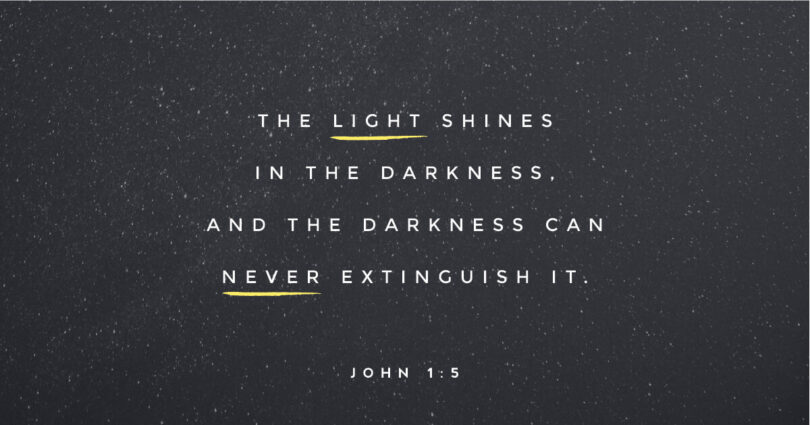 There was a man sent from God whose name was John. He came as a witness to testify concerning that light, so that through him all might believe. He himself was not the light; he came only as a witness to the light.

The true light that gives light to everyone was coming into the world. He was in the world, and though the world was made through him, the world did not recognize him. He came to that which was his own, but his own did not receive him. Yet to all who did receive him, to those who believed in his name, he gave the right to become children of God— children born not of natural descent, nor of human decision or a husband’s will, but born of God.

The Word became flesh and made his dwelling among us. We have seen his glory, the glory of the one and only Son, who came from the Father, full of grace and truth.

(John testified concerning him. He cried out, saying, “This is the one I spoke about when I said, ‘He who comes after me has surpassed me because he was before me.’”) Out of his fullness we have all received grace in place of grace already given.  For the law was given through Moses; grace and truth came through Jesus Christ. No one has ever seen God, but the one and only Son, who is himself God and is in closest relationship with the Father, has made him known.

When you walk into a dark room and see a form of something, you are unsure what it is, and your mind starts to fill in the unknown. Sometimes something looks scary, or you think it is a person. Worse, when you cannot see you try and navigate through that room and ram your knee into that coffee table that you swore was in a different spot. It is not until you turn the lights on that you see the true form of what is before you. The light shines and reveals what is genuine—and what was counterfeit—or a shadow of reality.

So, the question remains, what does this light reveal exactly? Jesus, as the Light of the World, reveals to the world what God is really like and sets the record straight about who God is. As well, He shows us what true humanity is supposed to look like, by both redeeming it and showing us to a better way as the new and better human.1 Look at what Jesus says about both Himself and, us, His followers:

I am the light of the world. If you follow me, you won’t have to walk in darkness, because you will have the light that leads to life (John 8:12 NLT).

You are the light of the world—like a city on a hilltop that cannot be hidden. No one lights a lamp and then puts it under a basket. Instead, a lamp is placed on a stand, where it gives light to everyone in the house. In the same way, let your good deeds shine out for all to see, so that everyone will praise your heavenly Father (Matthew 5:14).

Notice how He uses almost identical language to describe Himself and us. As His redeemed, Spirit-filled followers, we are called to be His representatives, His ambassadors, His image bearers on earth.2 We are, of sorts, a mirror that reflects the light of Christ into dark places, illuminating the darkness and revealing what is genuine and what is counterfeit.

This light that shines is a beacon of hope for the world caught in darkness—like a lighthouse signaling a lost ship at sea. When a captain and crew are being tossed back and forth at sea and all hope seems lost, it is the light shining off in the distance that can direct them home. That light represents more than just a direction to head towards but the very hope of life and safety of shore. As the Psalmist beautifully wrote: “Yes, my soul, find rest in God; my hope comes from him. He’s solid rock under my feet, breathing room for my soul, an impregnable castle: I’m set for life” (Psalm 62:5-6 MSG).

Ultimately, Jesus is the foundation of the hope people are so desperately looking for and we carry that reality inside us. I encourage you to meditate on John 1 and let Jesus speak to you today.

Jesus, give us opportunities to let our lights shine. Give us the courage to be lighthouses in the world for people to find their way home to You. Amen. 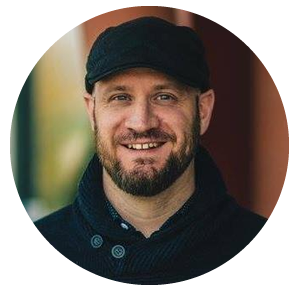 Drake Farmer
Drake serves as the Executive Pastor at Gateway Alliance Church in Edmonton Alberta where he leads the various teams, staff, and ministry development with discipleship at the core of everything he does. Drake loves to see people of all ages come to reach their full potential in Christ and to never ‘settle’ for less than what God would have for them.