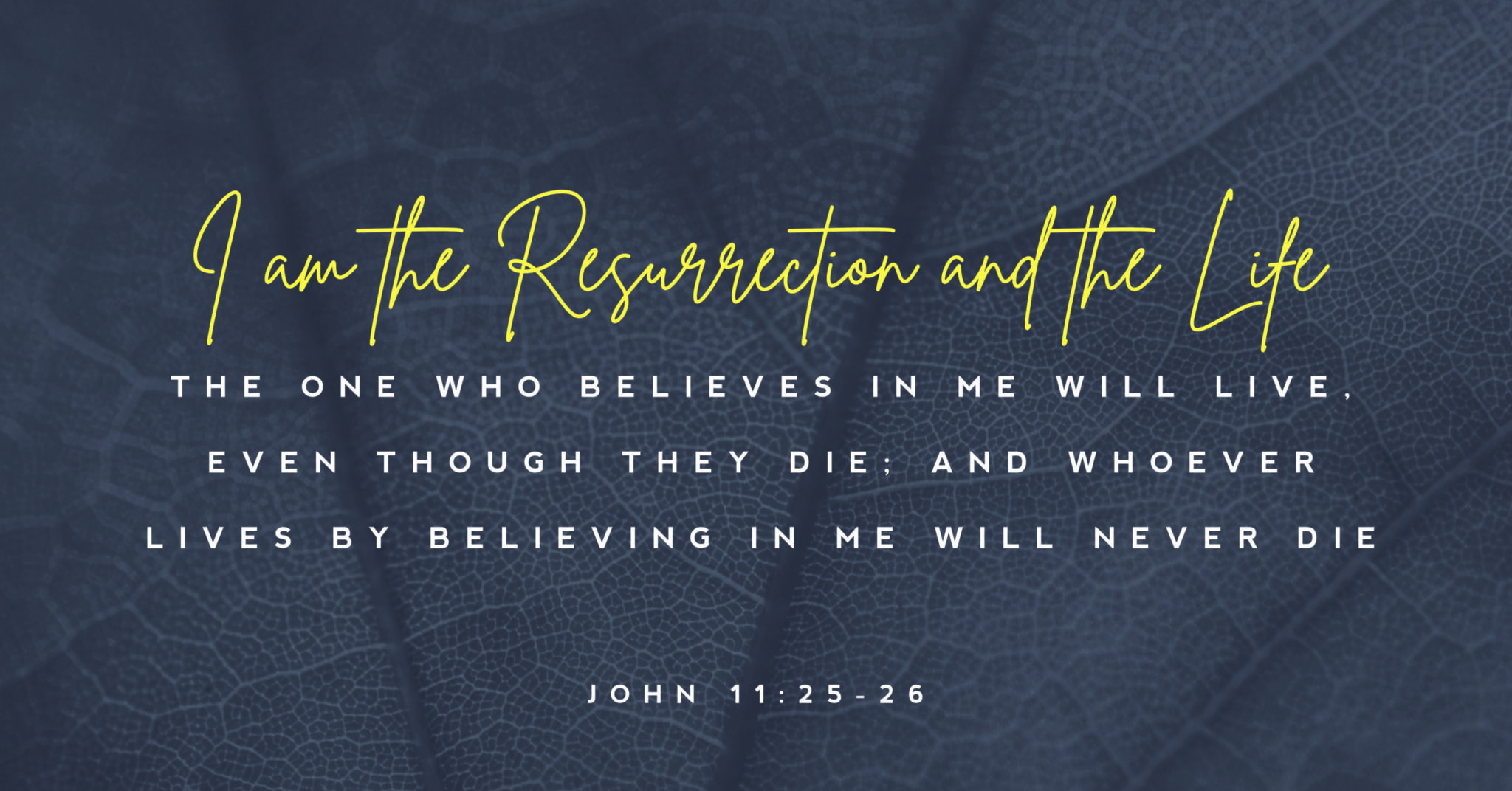 Now a man named Lazarus was sick. He was from Bethany, the village of Mary and her sister Martha. (This Mary, whose brother Lazarus now lay sick, was the same one who poured perfume on the Lord and wiped his feet with her hair.) So the sisters sent word to Jesus, “Lord, the one you love is sick.”

When he heard this, Jesus said, “This sickness will not end in death. No, it is for God’s glory so that God’s Son may be glorified through it.” Now Jesus loved Martha and her sister and Lazarus.  So when he heard that Lazarus was sick, he stayed where he was two more days, and then he said to his disciples, “Let us go back to Judea.”

“But Rabbi,” they said, “a short while ago the Jews there tried to stone you, and yet you are going back?”

Jesus answered, “Are there not twelve hours of daylight? Anyone who walks in the daytime will not stumble, for they see by this world’s light. It is when a person walks at night that they stumble, for they have no light.”

After he had said this, he went on to tell them, “Our friend Lazarus has fallen asleep; but I am going there to wake him up.”

His disciples replied, “Lord, if he sleeps, he will get better.” Jesus had been speaking of his death, but his disciples thought he meant natural sleep.

So then he told them plainly, “Lazarus is dead,  and for your sake I am glad I was not there, so that you may believe. But let us go to him.”

Then Thomas (also known as Didymus) said to the rest of the disciples, “Let us also go, that we may die with him.”

On his arrival, Jesus found that Lazarus had already been in the tomb for four days. Now Bethany was less than two miles from Jerusalem, and many Jews had come to Martha and Mary to comfort them in the loss of their brother. When Martha heard that Jesus was coming, she went out to meet him, but Mary stayed at home.

“Lord,” Martha said to Jesus, “if you had been here, my brother would not have died. But I know that even now God will give you whatever you ask.”

Jesus said to her, “Your brother will rise again.”

Martha answered, “I know he will rise again in the resurrection at the last day.”

Jesus said to her, “I am the resurrection and the life. The one who believes in me will live, even though they die; and whoever lives by believing in me will never die. Do you believe this?”

“Yes, Lord,” she replied, “I believe that you are the Messiah, the Son of God, who is to come into the world.”

After she had said this, she went back and called her sister Mary aside. “The Teacher is here,” she said, “and is asking for you.” When Mary heard this, she got up quickly and went to him. Now Jesus had not yet entered the village, but was still at the place where Martha had met him. When the Jews who had been with Mary in the house, comforting her, noticed how quickly she got up and went out, they followed her, supposing she was going to the tomb to mourn there.

When Mary reached the place where Jesus was and saw him, she fell at his feet and said, “Lord, if you had been here, my brother would not have died.”

When Jesus saw her weeping, and the Jews who had come along with her also weeping, he was deeply moved in spirit and troubled. “Where have you laid him?” he asked.

“Come and see, Lord,” they replied.

Then the Jews said, “See how he loved him!”

But some of them said, “Could not he who opened the eyes of the blind man have kept this man from dying?”

Jesus, once more deeply moved, came to the tomb. It was a cave with a stone laid across the entrance. “Take away the stone,” he said.

“But, Lord,” said Martha, the sister of the dead man, “by this time there is a bad odor, for he has been there four days.”

Then Jesus said, “Did I not tell you that if you believe, you will see the glory of God?”

So they took away the stone. Then Jesus looked up and said, “Father, I thank you that you have heard me. I knew that you always hear me, but I said this for the benefit of the people standing here, that they may believe that you sent me.”

When he had said this, Jesus called in a loud voice, “Lazarus, come out!” The dead man came out, his hands and feet wrapped with strips of linen, and a cloth around his face.

Jesus said to them, “Take off the grave clothes and let him go.”

Therefore many of the Jews who had come to visit Mary, and had seen what Jesus did, believed in him. But some of them went to the Pharisees and told them what Jesus had done. Then the chief priests and the Pharisees called a meeting of the Sanhedrin.

“What are we accomplishing?” they asked. “Here is this man performing many signs. If we let him go on like this, everyone will believe in him, and then the Romans will come and take away both our temple and our nation.”

Then one of them, named Caiaphas, who was high priest that year, spoke up, “You know nothing at all! You do not realize that it is better for you that one man die for the people than that the whole nation perish.”

He did not say this on his own, but as high priest that year he prophesied that Jesus would die for the Jewish nation, and not only for that nation but also for the scattered children of God, to bring them together and make them one.  So from that day on they plotted to take his life.

Therefore Jesus no longer moved about publicly among the people of Judea. Instead he withdrew to a region near the wilderness, to a village called Ephraim, where he stayed with his disciples.

When it was almost time for the Jewish Passover, many went up from the country to Jerusalem for their ceremonial cleansing before the Passover. They kept looking for Jesus, and as they stood in the temple courts they asked one another, “What do you think? Isn’t he coming to the festival at all?” But the chief priests and the Pharisees had given orders that anyone who found out where Jesus was should report it so that they might arrest him.

In John 11 we come across the amazing story of the death, and resurrection of Lazarus. Although He is a dear friend, Jesus famously elects to not rush back when word of his illness reaches Him and instead appears on the scene four days too late.

We read that on His arrival Martha went out to greet Him with both resignation and hope. She laments that Jesus did not save Lazarus but believes that He can do something more. Martha demonstrates deep and abiding belief in Jesus’ eschatological purposes—that He will have an impact in the destiny of humanity. She understood, somehow, that Jesus was working on something much bigger than the life of one man, or the suffering of one family, even if it meant losing her brother. Martha understood Jesus as the end, or goal of her salvation, but she could not get her head wrapped around the way in how Jesus would be the means. She believed that by His power He would one day right all wrongs, even her brother’s death, but she did not have the faith that she would see it in her lifetime.

Martha believed that Jesus was the Redeemer of the world, but she doubted that He could be the Redeemer of her circumstance. To this, Jesus remarks emphatically that “I am the resurrection” (John 11:26). He is the means of our salvation. “He who believes in me will live even if he dies” (John 11:25).  What Martha missed is how by trusting in Christ we can be a part of what He is doing—not only in the future—but today as well. That death is not the ultimate power in this world. That one who is more powerful than death is here to challenge its claim on our lives.

But Jesus did not stop there: because He is not only the resurrection, but He is also the life. Jesus being the life, in contrast to being the resurrection, speaks to the ends of His work. He is not merely the means by which we are redeemed and find life in the context of death, but He is the everlasting goal of His redemptive work as well. Everything that is, finds purpose and reason for being in Him. “That is everyone who believes in me will never die” (John 11:26). Not only is Jesus powerful enough to overcome death through resurrection, but His life will allow us to experience a world where death is not just overpowered but destroyed. A day is coming when all that will be known is the life of Christ and the perfection of His presence.

Jesus’ words to Martha remind us about exactly who He is and why we can trust in Him.

Which means that if you worry that you are beyond the reach of God’s power and intervention, or that you and your situation are too insignificant to matter, the promise of Jesus is that He is sufficient and interested enough to bring redemption to your life because resurrection is not just His future work, He is the resurrection today. And if you worry that your continued experience of God’s presence and faith in His plans will not amount to anything in the end because the world is too far gone, Jesus’ promise to you is that His work is effective because He is the life.

Jesus is the resurrection and the life; a statement that is equally true for today, as it is for all our tomorrows.

Jesus, thank You for being the same yesterday, today, and tomorrow. Thank you for the consistency that you provide in our lives. We ask for guidance as we lean into You and trust You daily. Amen.

Chris Smith is on the Board of Directors at The Christian and Missionary Alliance. He is pastoring in Winnipeg at The Bridge Church. He is married to Joanna, and together they have two sons and one daughter. Chris would consider himself to be a hobbyist when it comes to Transformer robots.
Learn more