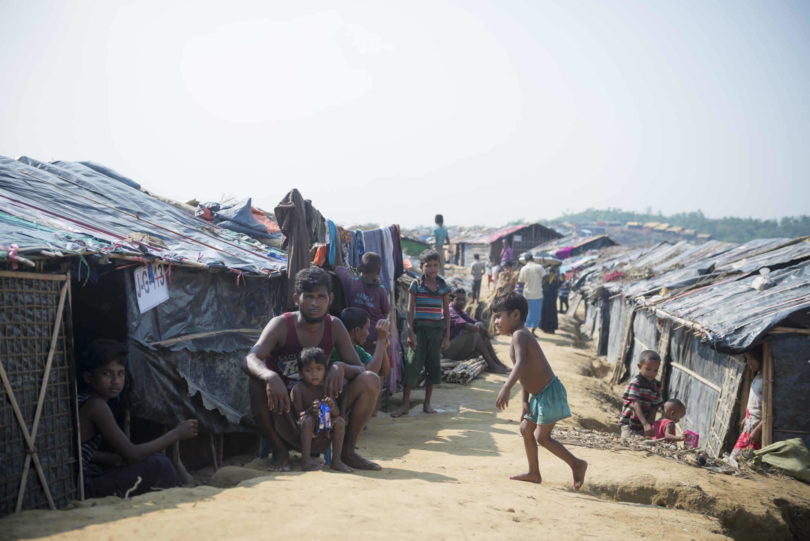 The Rohingya1, a Muslim minority group in Myanmar, are experiencing one of the worst atrocities perpetrated on a vulnerable people group in recent history. The government of Myanmar is advancing a cruel strategy of ethnic cleansing. Over 800,000 Rohingya have left their homes and fled to Bangladesh where they are living in sub-human conditions in the largest refugee camp in the world. The conditions are so extreme that many young men are willing to pay human traffickers to get them to another country. This involves a treacherous journey in overcrowded boats without food for up to two months. Many die on the way, and those who survive are taken to jungles in Thailand where they are tortured daily. As the human traffickers subject the young men to painful beatings, they hold a cell phone in front of their victims so that their families hear the horrific screams of their loved ones. The beatings continue until the families pay enough money to have them released. Once released, many of the young men end up in a southeast Asian country where some of our workers live—over 50,000 refugees now live in their city.

These young men have no status, no rights, and must work illegally to survive. They are continually arrested and thrown into jail until they can bribe their way out. While travelling in this region, Agnes and I were able to spend a few days at a refugee camp along with some of our Alliance pastors from Canada. We witnessed firsthand the struggles, pain, and emotional devastation of these vulnerable young men. I was paralyzed with grief when a young Rohingya man was asked the question, “What is your hope for the future?” He lowered his head and in utter despair said, “We have no hope!”

The incarnation, God becoming man, is the very reason why we have hope. Without Jesus, we have no hope, and only death to look forward to (1 Thessalonians 4:13–14). But for those of us who are in Christ Jesus, we are no longer hopeless! Scripture says, “Praise be to the God and Father of our Lord Jesus Christ! In his great mercy he has given us new birth into a living hope through the resurrection of Jesus Christ from the dead” (1 Peter 1:3). This living hope is the promise of eternal life (Titus 1:2) through Jesus Christ, our hope (1 Timothy 1:1). We have hope because Jesus came as a man, lived, died, and rose again.

Jesus brings hope, and when we are filled with His presence, hope radiates from us. Paul wrote, “May the God of hope fill you with all joy and peace as you trust in him, so that you may overflow with hope by the power of the Holy Spirit” (Romans 15:13). Bob, the pastor of a local international church, has been called by God to reach out to these Rohingya men—some as young as ten years old. He teaches them English and works with the United Nations to provide them protection. I watched as Bob taught English to a group of about 40 young Rohingya men. It was not just the content of the lesson, but the power of the risen Lord radiating from Bob that was making a difference. He was overflowing with hope as he taught! These young men knew Bob loved them, believed in them, and wanted the best for them. The atmosphere in the room changed into a place of hope. God was healing wounds, building trust, and breaking chains! Is this not why we do what we do? As we enter the darkest rooms—where fear, despair, and anguish rule—we bring the presence of the resurrected and living Lord. We speak peace and we call those in desolation into a life-giving relationship with Jesus. In the Rohingya community in this city, they speak passionately of the “white, bald teacher who loves the Rohingya.” He is a man of hope! It was Napoleon Bonaparte who once stated, “Leaders must be dealers in hope!” Yes! I challenge all of us this Christmas to be “dealers in hope”—to radiate hope, to speak hope, and to breathe hope into the darkness and desperation of those around us until the light of Jesus is released!

As we enter the darkest rooms, we bring the presence of the resurrected and living Lord.

1 The Rohingya are a least-reached people group focus of the C&MA. To learn more about the Rohingya visit cmacan.org/LRPG